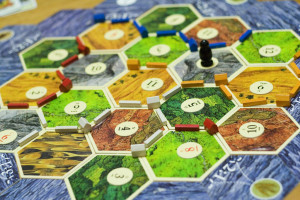 EVANSTON — Hoping to reach out to all of the single students this Valentine’s Day, Foster-Walker’s Executive Board hosted a Settlers of Catan tournament. “We felt that a nice night of Catan would be the perfect mixer for those guys and gals in Plex and all across Northwestern who happen to be single at the moment,” said President Ryan Moore, SoC ‘17.

Sources reported that attendance at the event exceeded Moore’s expectations. Participant Noah Niken, MEAS ’18, explained his decision to come that night: “Well, since all of my friends were out with their girlfriends, I kinda felt that this tournament was the best way to enjoy myself. Usually I just spend Valentine’s Day full of insecurity, thinking about all the reasons why I can’t get a stable relationship.”

While almost all of the participants were male, the attendees seemed rather unfazed. “Whether or not I hook up with someone doesn’t really matter to me right now,” said Niken, “all that matters is that I crush my enemies.” The Flipside has also been informed that Niken won the tournament, and following his victory he began dancing wildly, only to then start crying due to loneliness.

The Flipside also managed to get an interview with Ana Toker, WCAS ’19, the only girl at the event. “It honestly wasn’t too bad. I had a lot of fun and the guys there were super cool,” said Ana. “I mean, whenever I needed to trade for wood, all the guys had me covered.” While Ana was unable to win, she said that it wasn’t a huge deal, as her boyfriend from back home was visiting next weekend.