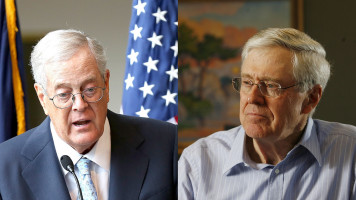 EVANSTON – Recent reports by the Illinois Election Committee have revealed that all of the candidates running for ASG President are being funded by the Koch Brothers. This development was discovered when it appeared that a number of the candidates running for President had millions to spend on website fees, putting up ads all over campus, and the fact that they could run for ASG President.

When asked about these developments, ASG candidate Mack Rowman denied all such accusations. “How could you possibly think that I could be bought out, I mean, I’ve always held the view that we should be digging for oil on campus and that climate change doesn’t exist,” said Rowman, as he was eating a $100 Prime Rib from Pete Millers. “Furthermore, if you ask me, I think you should be investigating my opponent, Caren Tam, over where her campaign got their money; I heard they got her a boat, while those cheapskates only got me a jet ski.”

Questions have arisen over why the Koch Brothers would be buying out candidates for ASG President, but an anonymous source has confirmed Charles and David Koch discussing how “Once we control ASG, then we will control all of Northwestern.”

Update: A new development has emerged as the Koch Brothers, after hearing how much power ASG really has, immediately suspended all funding towards their ASG candidates and proceeded to put their efforts towards buying Senators again.