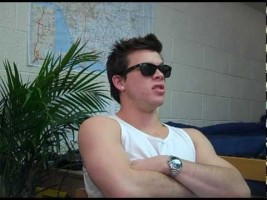 “Apparently a little bit of hyperbole is frowned upon around here these days,” Rodgers said, referring to his comment in class that the first pop quiz of the quarter hit like a suicide bombing.

Rodgers allegedly decided to drop Intro to Islam after this latest incident, but he was known for his off-color comments among his peers in the class for a while. “When he walked in the room the first day of the quarter and started riffing about Aladdin and magic carpets, I had a feeling he wouldn’t last long,” classmate Shannon Halpert said.

Rodgers, a recent pledge to Tappa Tappa Keg fraternity, still needs to fulfill his ethics and values distribution requirement but ultimately decided that doing so in Intro to Islam probably wasn’t the best idea.

“Once I realized my humor wouldn’t be appreciated, I knew I couldn’t show my face in that class again—kind of like I needed to wear a burqa or whatever,” Rodgers said.

At press time, Rodgers was also reportedly considering dropping his African-American studies class after his personal renditions of various rap songs were not well received.