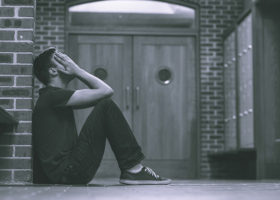 EVANSTON – The weather was 75 degrees American and sunny, people were bustling around downtown Evanston and exploring downtown Chicago, and area fuck up Ben Isaacs (WCAS ’18)—enrolled in three classes with essays due before the end of the week—only caught glimpses of it through the doors of Café Bergson during one of his increasingly frequent coffee breaks.

Reporters were first drawn to investigate after bouts of intense intermittent cussing were heard coming from the near-empty study carrels on the ground floor. According to Wes Lee and Mac L. Moore, who were required to be there for work study, when they first heard the sophomore history major’s poorly disguised poor decision making, they thought it was someone trying to break in. “We didn’t think anybody was stupid enough to leave all his work for Memorial Day,” Lee, who had obviously been that kid in high school, told the Flipside.

As of 2:51 PM local time, Isaacs was preparing to “get shit done,” having just finished up the fifteenth different Pokémon Nuzlocke video while he was reading the play he was supposed to analyze for Wednesday. “The previous three days that I could’ve been writing these were a much-needed break from all the hard work I do during the week.” Isaacs continued, “My res college tied for third at RCB Field Day, I downloaded Dark Souls, I promptly deleted Dark Souls, I saw my cousin for half an hour, I learned how to use comma splices in a journalistic piece. It was great.”

UPDATE (3:15 PM CST) – Isaacs has apparently accepted his fate and queued for a match of League of Legends.