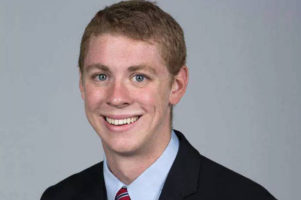 Walking free after three months at Santa Clara County jail—just in time for the start of Stanford’s fall classes—varsity rapist and convicted swimmer Brock Turner completed his summer internship through a combination of hours, feigned regret, and “good behavior.”

After Turner was charged with the sexual assault of an unconscious woman at an off-campus party this past year, he was sentenced to serve a residential internship at the Santa Clara County jail. The internship was personally designed by Judge Aaron Persky in collaboration with Turner’s expensive defense attorney, to be a “transformative learning experience” about the American justice system. The work will include summer career development, I.T. training, license plate pressing, as well as “confront[ing] his extreme privilege in the face of the less fortunate,” according to Persky. He will be provided free room and board.

“The internship was originally supposed to last six months,” noted Persky, “but I decided to reduce it so that it wouldn’t interfere with his life too much. Three months of low security internship is more than enough for a couple nights’ excesses and their irreparable harm to multiple women.” The sentence has proved to be controversial, but according to Turner the internship wasn’t paid.  “Which sucks,” he remarked, “I originally had my eyes on a lucrative summer job at a local consulting firm.”