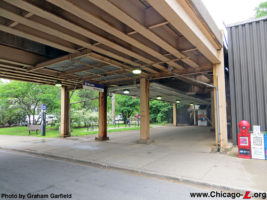 A naked, clearly homeless man was seen sitting by the front steps of the Noyes L Station early Wednesday morning, drawing large crowds of gawking onlookers before he was escorted off the premises. Several commuters reported missing their trains for the spectacle.

“It was an interesting thing to watch,” said pedestrian Mark Latch, “The guy was just laying down on the hot sidewalk, listless and devoid of any mental thought, but, his performance art really makes me think how fucked up our nation really is.”

As people got to and off the L and saw him, numerous debates emerged on what his “demonstration” was all about. Carey Knight, a young clerk at Wells Fargo, saw his act as one of environmental protest. She said, “Laying out in front of the L, looking like he had nowhere else to go, it just has to show the dangers of man-made climate change. It was a life-changing experience. Shame I never got his name.” Others, however, saw his “act” as a commentary on the current political climate in America. Larry Junct, a senior at the University of Chicago, told reporters what he believed the protest really meant. “Truly, his actions reflect the dissatisfaction Americans have with their two choices for President. This is why we must vote for Gary Johnson this November,” said Junct, as he attempted to rally the crowd around him into starting a chant, to no avail.

Praise for his performance and powerful statement spread after the morning commute, and soon the man who was identified as Akono Jefferson was seen being prodded by police to move from his spot. Since then, the community has been mixed on his latest statement on police brutality.

“The fact that people noticed me is nice,” groaned Jefferson, “but I could really use a hot meal and some pants.”