Doñald Trump Adds ñ to Name in Appeal to Latinos 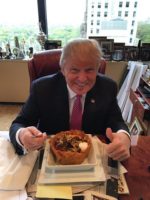 Republican presidential candidate Donald Doñald Trump’s campaign has made another unexpected move. Shortly after realizing taco bowls are not authentic Mexican cuisine and that Mexicans are not the entire Latino voter base, Trump released a statement regarding the tilde: “My ancestors were Látiño!” he tweeted. “I am óné huñdréd pércént New Mexican, the móst Mexican óf áll Latiñós!”

Of course, with this remark came backlash from the marginalized communities offended by Trump’s words. A recent Facebook post made by ex-Trump supporter Brett Haywood of Mississippi has gone viral, summing up his constituents’ outrage: “As a member of the alt-right I feel I speak for everyone when I say Mr. Trump’s words deeply disturbed me. I feel like us red-blooded Americans are the most attacked group in America right now and Trump needs to focus on building that wall instead of pandering to those dangerous hate groups like the Hispantino community. Since I could never vote for Shillary, I guess I’ll vote for George Wallace again.” When asked if he had ever met a Latino person in his life, Haywood shrugged, snorted, then returned to posting angry remarks on anonymous internet forums.

Clinton’s campaign could not be reached for comment; however, sources indicate she was rolling on the floor cackling, “Stop! Stop! Ohmygod he didn’t! No way I can’t even… this is too much!” in an attempt to connect with young voters.