Joan of Arc Was Seriously Lit 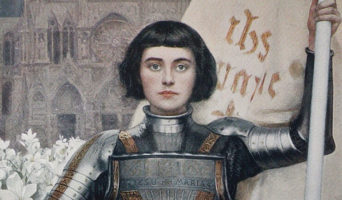 BIRMINGHAM, UK – New research coming out of the Neville Chamberlain Center for European Appeasement has suggested that Joan of Arc—the French saint and heroine of the Hundred Years’ War—was absolutely toasted following her improbable string of successful military victories.

Citing her visions of the archangel Michael and various saints and her unheard-of success leading a French army, the team of British scholars headed by Roy Edward Richardson of York have put forward the theory that, instead of the typical explanations of schizophrenia or divine inspiration, Joan of Arc was under the influence of a stronger hallucinogen than religion. According to Richardson, a researcher who has studied Joan of Arc for his whole life, “the Maid of Orléans did what most teenagers do and lit up at least once, according to our historical data.”

The armies, taking inspiration from her delusional disregard for life or limb, blazed their way through northern France under her (and, according to some sources, a king’s) guidance before she was betrayed and got ruined in Rouen.

Richardson, citing medieval manuscripts, described the bishop presiding over her trial as giving her “the sickest of burns.”