All-Male PA Group Awkwardly Says “No Homo” After Every Sentence 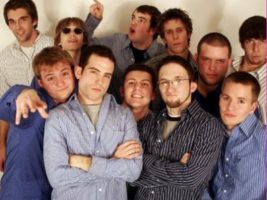 With a more awkward sexually-charged atmosphere than a high school prom, Adam McKinley, WCAS ’18, and his all-male PA group have struggled to maintain an aura of immaculate heterosexuality. “Once I looked at the list of names I realized I was going to be swimming in dangerous waters.” McKinley reported. “In addition to the long PA training I spent hours conditioning myself to add ‘no homo’ reflexively after every sentence I say no homo.”

The obvious lack of a female presence within the group became most apparent when John Montague, WCAS ’20, and Warren Alvarez, WCAS ’20, accidentally agreed on the difference between sexuality and gender without reasserting the fact that they were not in fact sexually attracted to each other. Montague recalled his panicked thoughts at the time, “My mind flashed back to every time we had actually brushed against each other without turning it into a ‘bro’ moment and I just thought… Oh god, he thinks I want to bang now.” Thankfully, Alvarez managed to defuse the situation by talking about the girl he totally hooked up with in Elder last night and the group could continue their dialogue about sexual health on campus.

“It was a wild ride,” McKinley said, “I’m glad that most of them can talk to the girls on their floor now no homo. We can get brunch as a PA group and try each other’s food without having to ask for a sterilized fork now; it’s very liberating no homo.” The group has slowly dissolved as the school year begins, unlike the all-female PA group which has formed healthy lifelong bonds.

At the group’s most recent meet-up this past Saturday, Alvarez and McKinley accidentally brushed hands and said “no homo” at the same time while locking eyes, ruining the system for everyone.