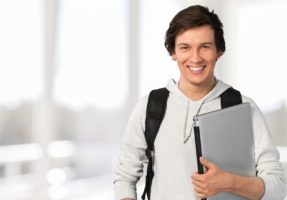 Unanimous eye witness accounts have revealed that Leonard Jones, WCAS ’19 and longtime obnoxious kid in front of class, has a deep and well-grounded understanding of oral sex. Jones however, is no stranger to controversy. He has previously gained infamy for asking questions after the professor has gone over time, reminding her when she forgets to collect homework, and for literally being the only person who actually sits in the first row.  Now, however, the data is conclusive: Leonard Jones really can eat a dick.

According to peers, the watershed moment occurred just after Jones exited class unaware that his comments on a technicality had cost the class half a letter grade. A fuming student reportedly shouted at him, “You know, you can really eat a dick!” before following the insult up with a series of awkward sucking noises in poor imitation of oral sex.  It was at this point, witnesses recalled, that Jones pulled up his PowerPoint.

“You used too much teeth. The penal area is highly sensitive and even accidental grazing can cause immense pain to the penis-bearer.” Jones asserted, “But I’m getting ahead of myself. Let’s walk through this bullet-point by bullet-point.” As the slides went on, complete with tasteful color scheme and animations, Jones inevitably drew a crowd. “By the time I reached the part about how wetness makes the dick eating process more luscious and sensual, there were plenty of sophomores and even a few professors standing around avidly listening and climaxing,” he said later, recalling the event. By the time all was said and done, everyone understood that Jones was a real cocksucker.

Some also claim that this was not only a big change for Jones, who had previously just been that jerk who won’t let you borrow a pencil real quick, but the Northwestern community as a whole.  “Very few people at Northwestern really understand how pleasurable sex works,” recounted Sydney Jacobs, WCAS ’17, an audience member, “I’m glad that the man who once criticized my professor’s grammar errors is now finally correcting our sex lives,” she added.

Sucking a dick is also just one of the many skills this wunderkind has mastered. Among others, he can also really jump in a lake, lick my ass, and go screw himself.

However, Leonard himself is baffled by the fame. “I don’t know what the big deal is about sucking a dick,” he told Flipside reporters, “I just got all my info off eHow.”