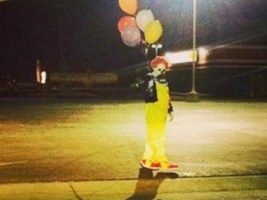 Between home responsibilities, birthday parties, and stalking the abandoned warehouse on the corner of 15th and Chestnut, clowns from across the country are reportedly finding it difficult to maintain a balanced lifestyle.

The economy has been particularly hard on these rainbow-afro-wearing citizens. “You wouldn’t hear about it because the lame-stream media doesn’t care, but the price of seltzer water has been skyrocketing in the past few years. Our employers won’t reimburse it, so the cost is forced on us!” stated one Johnny “Mr. Giggleheimer” Monroe.  “Working overtime hardly covers my groceries. There’s just no time in the day to relax! The only time I have to myself is on my walks through the woods near the kindergarten,” said “Beanie” Grimaldi with a huff. Clowns everywhere have reported taking to local forests, alleyways, and your closet to blow off a bit of steam from life’s troubles.

When pressed about why he felt the need to carry a rusty machete everywhere, Monroe simply began ranting about the “cost of a good grindstone” and “Obama… taking away our guns.”