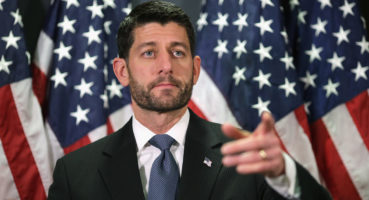 Locked inside Trump Tower for the third consecutive day—as if attempting to wait out the siege of women he sexually assaulted, alternating between lobbing tweets over the ramparts and staring blankly at his own reflection—Donald Trump has been too busy imploding to control what little of his campaign anyone could “control.” Somebody had to pick up his dry cleaning, and, surprisingly, Trump’s chief apologist Paul Ryan was the one to do it.

According to Robert Piombino of Trump Tower’s in-house laundromat, Speaker Ryan was the one who walked in to retrieve his laundry this morning. While initially saying he would go without lunch in order to cover Trump’s extensive unpaid tab, Piombino had to remind Speaker Ryan that he needed to actually pay for things in order to get them.

When he finally got Trump’s laundry—a set of starched white robes—he did a double-take. Despite saying he was shocked and appalled, he nonetheless reached tentatively over the counter for them and attempted to hide them under his suit jacket. “He seemed a little embarrassed about holding the bag,” said Piombino, “but he just kept telling me it was for the Supreme Court.”

Speaker Ryan seems to have taken up the position of Trump campaign hostage after Chris Christie escaped captivity this past Thursday. While seeming to be equally uncomfortable with his role in his own party’s destruction, Ryan has repeatedly said that it’s a calculated choice with no accompanying moral or political payout. Indeed, when questioned about his role in the 2016 campaign, Ryan just gave his standard grimace and asked, “Why did I ever agree to this?”

With Trump’s prospects dimming, Speaker Ryan is now praying that the party that allowed Trump to pretend to be a politician will allow him to continue pretending to be a statesman and a leader under Hillary Clinton’s presidency.