New ASG Senator Thinks He Can Make a Difference 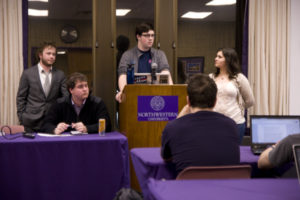 Local sources have confirmed that the new ASG Senator Aaron Criker, WCAS ’19, truly believes that he can make a difference. “You know, when I heard about how Northwestern has a student government, I just had to get involved. I really think that I can make a difference through ASG, as I figure it’s the type of organization that can make lasting changes on campus. In fact, I’ve heard all about last year when they passed important resolutions on Sodexo and had a contested election; if that kind of stuff can happen, then surely ASG is a force to be reckoned with.”

Criker’s optimism, however, has been mocked by current ASG senators. “Oh my God, that’s hilarious,” said ASG Senator Max Dill, Medill ’17. “Does he also think that he can make it rain candy? Trust me, that guy is going to learn soon enough how ASG really works.”

Regardless of the comments, Criker still believes that he can make a difference through ASG. “Those guys are just cynical after being in the game for so long. But that’s why fresh blood is needed in every government to ultimately make for stronger institutions. I’m sure of it, especially as I’m headed to my first meeting today.” After the meeting, various sources have confirmed that Criker began the meeting with a face of pure joy that slowly turned to sadness as the meeting progressed. He was seen crying in the bathroom after the meeting.