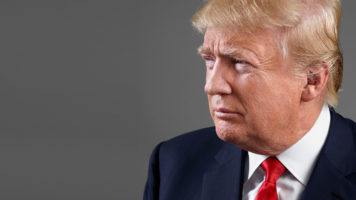 Here at The Northwestern Flipside, we apologize for not having a Trump victory article, but we believed in a benevolent God. That has changed. We have determined that God is not a benevolent being, but rather a vengeful force indeed. “That’s blasphemy,” some may say, but those who say it miss the fact that God has allowed now President-Elect Donald Trump to come so far.

Since the first day when Trump called all Mexicans rapists and drug dealers, God merely looked upon the actions that transpired with a joyful smile, as if mocking us for what would soon happen. As the election progressed, it seemed that God was working to help Trump get elected, as Trump crushed his other opponents in the primaries and was pitted against almost-equally disliked Democratic presidential nominee, Hillary Clinton. Clinton now probably recognizes the fact that God is not benevolent but rather cruel, as FBI Director Comey has handed down swift judgement against her by referencing her emails again, causing her position in the polls to collapse. All the while as Trump has since grown in his standing in the polls regardless of everything he has said since he was born.

“Why is God doing this to us?” some ask, but if you ask such a question then you fail to see that the world we live in is a cruel one, one that we have no control over. The divine being who watches over us is clearly upset with something humanity has done. Perhaps God is angry that we overlook cases of sexual assault and rape on campus, or for what we do in the late hours at the Deuce, but, if this election has showed us anything, it is that we can no longer trust the God we worship, for He has condemned us and abandoned us to the forces of the 2016 election. We here at The Flipside apologize for not having a Trump article prepared, and will work tirelessly in the future under the new President Trump.

Featured, Nation, Politics It's all over, It's over, RIPinPieces