Alice Millar Vandals Sentenced to Literal Slap on the Wrist 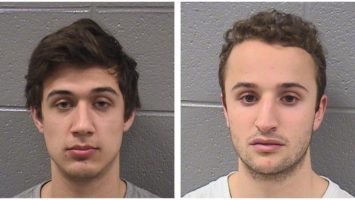 Yesterday at the Cook County Circuit Court, former Northwestern students Matthew Kafker and Anthony Morales received an actual slap on the wrist as punishment for their vandalism of the Alice Millar chapel.

“After deciding to drop the 24 felony charges against the vandals, we felt that only a literal wrist slap would properly convey our indifference to their crimes,” said Cook County State’s Attorney Anita Alvarez. “Commentators often describe community service or small fines as ‘wrist slaps,’ but we wanted to rise above the limitations of metaphor and really drive home the lack of consequences that money and privilege can earn.”

The sentence was carried out in front of a judge by each of the defendants’ mothers. “We thought a wrist slap from a bailiff might be too harsh,” Alvarez explained. “Because the two boys took this underwhelming punishment from their own mothers, they understand that drunkenly breaking into a historic chapel and covering it with 4 different kinds of hate speech worth $16,000 in damage is roughly equivalent to forgetting to take out the trash.”

The State’s Attorney had to excuse herself in order to attend the criminal trial of a black teenager facing 1-6 years in prison for marijuana possession.