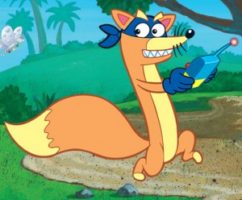 “Oh man! Why steal objects when you can steal hearts?” romanticized Swiper as he created his account. “Besides, I’m ready to start meeting new people. Dora and her anthropomorphized backpack get old after a while.”

After he set up his profile, Swiper was allegedly presented with Allyson, 26, an “agile and silky” red fox who likes “living, loving, laughing, having fun but not too much fun, hanging out with friends and family, and kinky shit.” Sadly, the fun didn’t last long.

A miniature version of Tinder customer service rep Brad Sean then appeared over Swiper’s left shoulder, according to witnesses, and tried to tell him he could “just use the ‘Heart’ button instead of swiping,” but Tiny Dora responded by calling Swiper “soft,” screaming “You won’t” in his ear, and obscenely questioning his foxculinity.

Sources indicate the woebegone fox tried to tell Tiny Dora he was just looking for a little love in his life, but she beat him at his own game, taunting, “You’re too late, you’ll never find it now!” Swiper, having caved into the hopelessness of his dilemma, was seen bidding farewell to Allyson, to hang outs, to fun, to laughter, to love, to life. To kinky shit.