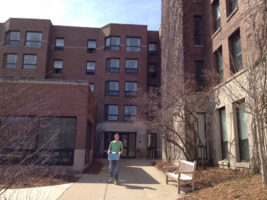 Sources have confirmed that following the walkout protesting the Muslim Ban yesterday at the Multicultural Center, Hinman RA and local Republican Luke Sandrom, announced that he would counter the protest with a Muslim lockout. “How dare those dirty liberals protest the ban that is keeping America safe?” remarked Luke when asked for comments, “so, when I was reeling over in my safe space, crying over their disgusting actions, I thought of the perfect way to get back at them.”

Sandrom stated that the Muslim lockout was designed to keep Hinman safe and make sure that those “pesky Muslims” would stay out. “This new policy will both keep Hinman safe from all forms of Terrorism and make those liberals regret every protesting against our Fuhe-, I mean our President Donald Trump.”

Since the Muslim lockout was announced, administrators were quick to shut it down and fire Sandrom from his job. However, new sources have reported that Sandrom has since dropped out of NU after receiving a job from the Trump Administration. Sandrom’s new job as White House RA will empower him to enforce quiet hours in the White House and organize events that will keep Trump and his advisors happy.

Featured, Local, No. 213 Blame Obama, BUILD A WALL, It was obama, It's not a ban, Nobannowall, Obama did this, Trump