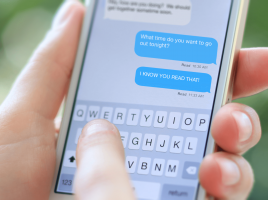 Reports from Bobb Hall state that despite the read receipts on the last three texts, area sophomore Joseph Lutz courageously decided to send a fourth “hey wassup” to a non-responsive girl he had just met. “I’m sure she’s just busy. Or playing hard to get. I get that from chicks a ton,” Lutz explained. “They don’t wanna seem overeager, ya know? Classic.”

When asked how he met his “elusive vixen,” Lutz’s described a meet-cute for the ages: “I was swiping wildcards at SPAC and I refused to give hers back until she gave me her number.  She did not wanna do it. She even threatened to call security. It was hilarious. But I got it.”

The freshman, saved as “Kim (gym)” in Lutz’s contacts, initially declined to comment, but after numerous emails from our staff, she finally reached out to explain that she’s “just sooooo busy” and “just focusing on school rn ha ha.”