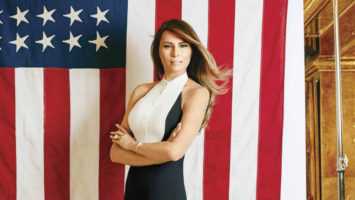 Following a tumultuous week attacking newspapers questioning her efforts to benefit off her husband’s presidency, sources have confirmed that Melania Trump has been concerned how to represent a country she is not even from. “When I first married the Donald, I thought I would be able to live the pampered life of an Eastern-European trophy wife, spending my days making millions off my body and selling numerous off-brand beauty products to desperate women who want to look like me,” stated Melania during an interview at Trump Tower, “but ever since Donald decided that he wanted make this country great again, I’ve been thrown for a loop on how to best be this nation’s First Lady.”

Melania discussed how her attempts to copy another First Lady ended in disgrace when everyone made fun of her for doing it. “They all seemed to love Michelle, so I thought by giving the same speeches and wearing the same dresses as her, that would be the best way to be First Lady. But then they all started laughing at me and made mean memes about me, so now I don’t know what to do.”

Since then, Melania considered going back to Slovenia to escape the horrors of being First Lady of the United States, but sources have confirmed that President Trump has refused to let her go. “I’ve given everything to him; I gave him our lovely son Barron and still stand by him even as he sends this nation to the crapper, but he refuses to listen to any of my demands.” However, recent sources have confirmed that Melania has found the perfect way to be First Lady: staying holed up in Trump Tower raising her son, giving her the peace of mind she needs during this change while also screwing the nation out of millions to keep her as secure as a Disney princess.