Every Time Samantha Bee Says Her Name, It Gets Faster 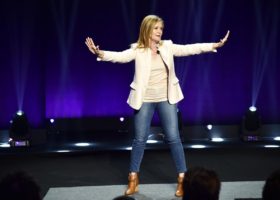 As students poured out Comedy Central’s Samantha Bee’s much anticipated talk this Tuesday at Cahn Auditorium, a look of serious disappointment could be seen across the hundreds of faces that had hoped to see a good night of standup from the star of Full Frontal with Samantha Bee. Instead, Bee’s routine lasted a mere 7 minutes and 4 seconds instead of the expected 60 to 90 minutes. Michelle Dawkins, WCAS ‘19, who flew in from Elder to see Bee, seemed to echo what a majority of students were feeling. “I think she said something bad about Trump, which is a plus, but she was going so fast I couldn’t tell for sure.”

At approximately 8:34 PM, after the lights had gone off and the sound equipment put away, only one student remained in his seat. Malip Jones, MEAS ’20, a self-proclaimed “savage memelord” was unavailable to comment, as he was too busy posting about Bee’s talk on Reddit, 4chan and other various “dank forums.” Critics of the night’s events argue that Bee went for the classic “meme over theme” approach, in which she used repeated meme usage over any actual writing, effort or skill.

Later that night, a small group of protestors gathered outside Cahn in response to the incident.

Featured, Local, No. 217 Bee Movie, College Democrats, speaker, We Decided This Was a Good Article, Yep