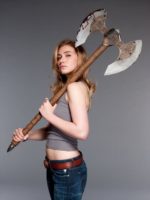 Several reports emerged today indicating that Josh Kulkin, SESP ’19, has spent the last few days avoiding his girlfriend Kassidy Ruben, WCAS ’20, at all costs after she told him they needed to talk before proceeding to sharpen her medieval weaponry.

“I’m honestly kind of afraid for my life,” said Kulkin. “I thought Kassie and I were doing fine, but I think I messed up the other day when I posted a few Snapchats to my story with this girl from a party. She can get a little jealous sometimes.”

Kulkin described how he received a text from Ruben the morning after his interaction with the Snapchat girl that simply stated, “We need to talk. Meet me in Norris.” He arrived to find Ruben sharpening her battle axe. “I always wondered why she had that thing,” he said. “I used to think it was pretty cool, but now I’m pretty sure she’s gonna kill me with it.”

He described how when he tried to approach Ruben, she raised the axe and started towards him. “I was really confused at first, but when she started swinging at me, I knew something was up,” he said. Since then Kulkin has been hiding out in an undisclosed location.

When Flipside reporters attempted to interview Ruben, she was indeed wielding an extremely sharp battle axe. She refused to answer any questions and simply demanded to be told where Kulkin was hiding or she would start swinging.

“I think my next move is to try to break up with her over text, but that might make her bring her mace into the equation,” Kulkin said.

Kulkin also said that anyone who knows Snapchat girl should warn her about his axe-wielding girlfriend. He would do so himself, but he didn’t get her name.