Op-Ed: It’s Not Too Late for Bernie to Win 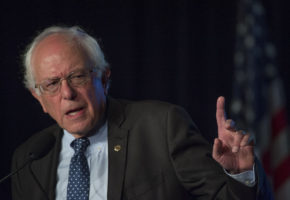 I know that the 2016 primaries may have seemed like the end of presidential road for Senator Bernie Sanders, but after more than two months with the Trump administration, I refuse to give up hope. I believe that Bernie could still become president of the United States somehow.

Most importantly, Bernie is the best option. The end of the election does not mean he isn’t the best person for the job. Have you guys been reading his tweets? This guy is the kind of woke we need in the Oval Office, and we can’t forget that just because everyone already cast their ballot.

Now I know most people can’t believe that Bernie could make such an impressive comeback when Hillary Clinton, who defeated Bernie in the primary, couldn’t even win with a majority of the popular vote. These naysayers keep arguing that someone who didn’t even make the final ballot can’t possibly become the president. But negative thinking like that isn’t going to accomplish anything.

If we all just put our total faith and trust in Bernie, we can do this. I don’t know how, or what it will take, it’s not too late. We can all see that Bernie is the right choice, so let’s just make it. If we believe hard enough, Bernie will soon be turning those tweets into amendments.