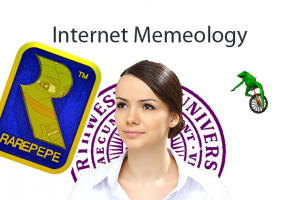 While memes have always been the cultural bastions of the modern era, local meme hero Ariane Walsh, SESP ’17, was not content to rest on her meme laurels as a meme historian. In a press conference earlier today, she announced that she would not let her success blind her to the problematic nature of meme history. Especially the dubiously presented meme history classes offered at Northwestern as part of their meme studies degree.

“A wise man once said that those who ignore the past are doomed to repeat it,” Walsh explained, “and we must not sit idly by as reckless memesters throw us back into the past.” Walsh also advises that people restrain from putting their personal interests ahead of society. “This perpetual tide of progress must be tended with vigilance, humanity and insight,” she stated, “and, no matter how rare your Pepe is, we must not forsake the ideals of our visionary ancestors. We must not let our memes be dreams.”

Despite Walsh’s hopes, many people simply refuse to let sleeping memes lie. Area redditor Carl Hamburg described the dangers in limiting culture. “Kids these days just don’t understand the value of quality memes,” he mused. “If we repress our dank past, we may forgo the spicy future  and even the rarest of Pepes would be unable to save us.”

Although Walsh disagrees with these views, she emphasizes that we all stand strong together. “Who dat boi?” she asked rhetorically, “We are all dat boi.”