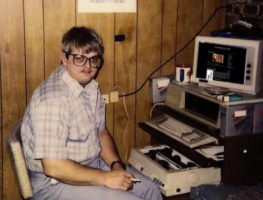 In an unprecedented turn of events, freshman Pedro Schwartz, MEAS  ’20, has lost his Wildcard, despite maintaining his pure, oh-so pure virginity. Schwartz detailed the saga: “I must’ve been in the library for hours. I was tutoring a few girls from my Comp Sci class, but then they left because they had ‘to get ready for a party.’ They said we should all hang soon. That should be fun.”

Schwartz then spent the next two hours customizing his League of Legends character to optimal aesthetic satisfaction. Upon returning home, Schwartz called his mom, grandma, sister, and great uncle before being tucked in by his RA. When he woke up the next morning to the pleasant sound of his “Rubber Duck Alarm Cluck,” he mistakenly tried swiping in for breakfast at the Hinman dining hall with his Domino’s loyalty card (he’s only two pizzas away from a free 2-topping pizza) only to discover that his Wildcard was missing. Schwartz commented, “It was weird though, because I was still a virgin. Am still a virgin, I guess.” Schwartz started rubbing the back of his neck and pushed his glasses back up his nose, looking blankly at the floor tiles.

Schwartz promptly began asking each and every stranger, “Are you my Wildcard? Are you my Wildcard?” Still, Schwartz sustained his virginity, whilst being bereft of Wildcard. Upon reaching the Wildcard office to obtain a replacement, Schwartz thought he had then lost his virginity, but was quickly corrected by a Wildcard Office employee. The employee stated, “Oh no, honey, that’s not how you do it.”

When asked what he planned to do next, Pedro Schwartz, now fully in possession of both virginity and Wildcard, responded, “I really want to ask this girl out, but I also just downloaded the update for the new mod of GTA7: Rise of Transformators; so I’ll probably just buy some Mountain Dew and play video games. I might try to lose my virginity…We’ll see.”