Area Engineer Relaxes With a Bath and Single Variable Calculus 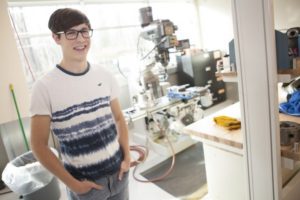 Slipping into the bath after a long day of high intensity designing, thinking, and communicating, area engineer Frank Ryan revealed his evening plan to relax with warm water and some nice single variable calculus.

“It’s been a long day,” Ryan said in a private conference with his bathroom mirror, “You deserve some time to yourself.”

By all accounts, the last week has been a very long one for Ryan—involving several midterms and problem sets in fluid mechanics and complex analysis. However now, according to Ryan, that time has long passed. He’s earned himself a short break and is just ready to have a nice bath and do some cool laid-back single variable calculus.

“I know you could call me boring for not doing something more exciting like multivariable,” Ryan said as he put scented candles around his bed, “But I really enjoy it and that’s what counts.” He added, “So many gorgeous closed-form analytical solutions and none of those other pesky variables cluttering it up.”

Ryan, like many engineers, recalls his single variable calculus like so many of those long forgotten childhood memories. “We were so young back then,” Ryan recalled fondly as he used chain rule, “We’d play on the playground and sip from our juice boxes and just do some derivatives and integrals without a care in the world.” He continued, smiling as he did an optimization problem, “I miss those days and it’s nice to get some of that feeling back.”

After finishing his bath, Ryan then pulled out a linear algebra textbook for some calming bedtime reading.