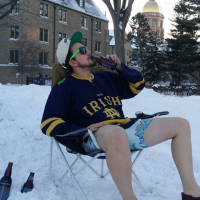 As tentative spring flowers gingerly poke their buds through the all-too-recently frost-ridden soil, signaling a transition from discordant winter to cheery spring, local man Cliff Remlington has reportedly been seen angrily walking up and down the block wearing a pair of dark green cargo shorts.

As neighbors, leading their excited dogs around Evanston, passed by, they allegedly asked Remlington if he was happy that it was finally shorts weather. Sources have confirmed that yesterday, after Mrs. O’Flannigan remarked that it would do her old bones some good to get back into her spring wardrobe as Remlington appeared to have done, Remlington sighed and walked back into his apartment.

“Look, I know I’m no hero for wearing shorts in the snow, but it just really gets to me that these people think I’m in any way comparable to them. I mean I was out bringing in the mail, covered in snow, only wearing my Tommy Bahama Relax ‘Survivor’ Cargo Shorts. I don’t think they even noticed.” Remlington later said. “It’s on days like these that I think no one will even look my way when I go out in nothing but a thin white undershirt, nipples erect, on display for the world to see. I’m clearly peacocking but not one person has had the courtesy to point it out.”

It is rumored that after eating an entire rotisserie chicken with his hands for lunch, Remlington has decided to add worn flip-flops to his accoutrement, claiming that it’s not even that cold anyway. At press time, Remlington was seen smiling and explaining to Mrs. O’Flannigan that no, he actually prefers wearing shorts and sandals in 43° weather and that this was nothing. He went on to explain how she should have seen his boy Ralphie in Detroit last week walking around in the snow sporting nothing but a pair of torn briefs, socks and sandals, and Lift Hard or Die Sawft stringer tank top.