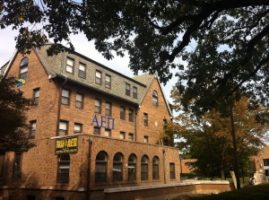 McCormick Computer Science Professor and preeminent Holocaust denier Arthur Butz spent this past weekend at the AEPi house playing a game he called “Two Truths, One Historical Lie” with some members of the Jewish Fraternity.

The Hoax of the Twentieth Century author showed up at the doorstep of the Fraternity uninvited according to Chapter President Jacob Leiner, telling the Flipside, “it was one of our Gentile pledges who let him in after Butz told him he was bringing us a gift basket for Purim!”

Once inside the house, Butz reportedly lured members down to the main living room where he proceeded to “engage in a dialogue with them to open their minds about opposing ideas.” At which point he proceeded to play a game of Two Truths, One Lie that turned into a dogmatic rebuttal to all common knowledge about the Holocaust, to the increasing discomfort of the Fraternity members.

Butz said he was emboldened by the recent comments Sean Spicer made saying that Hitler did not use chemical weapons and referred to concentration camps as “Holocaust Centers.”

“What we saw there was Spicer being so convinced of the truth that he couldn’t convincingly cover up the lie anymore,” said Butz. “He knows as well as any other knowledgable human being that Hitler didn’t use chemical weapons because he didn’t kill anybody.”

When members of AEPi raised concern about his ostensibly dangerous ideas, Butz retorted that he was simply more “woke” than everyone else in the room, going so far as to tell a student whose grandfather was killed in the holocaust that he wasn’t dead but rather hiding in a cave somewhere in Argentina.

“I think it’s important with this P.C. culture that people are exposed to all angles of an issue, even if it’s a perspective they disagree with,” Butz said. “These snowflakes have to be put in their place!”