Area Student with One Earbud Out Hears Gossip About Himself 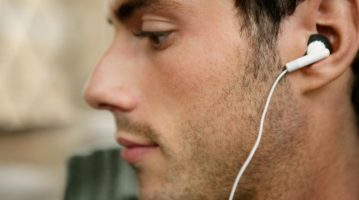 When McCormick sophomore Jordan Steinhauer is not in class or concert band rehearsal, he can be found with at least one earbud in at all times, whether or not he has music playing through it. Early this past Thursday, while Steinhauer was unwinding in Norbucks, his half-commitment to earbuds enabled him to hear his name spoken a few chairs over.

Over the general din and a Dan Carlin podcast on the history of potential nuclear holocaust, Steinhauer heard two of his classmates talking animatedly about, according to Steinhauer, his “propensity to make a fool of” himself at mixers. One source unassociated with either side elaborated that the two other students couldn’t understand why Steinhauer was suddenly so much more social and joyful without the aid of alcohol, while still needing to leave parties before 11.

One of the students, Penelope Makris, WCAS ’19, suspected he was merely being introverted most of the time, but the other (who preferred not to be named due to his upcoming group project with Steinhauer) was convinced that whatever was on Steinhauer’s iPhone had to be more interesting than the B+ quality Norbucks playlist.

“I’m always paranoid that people will be talking about me,” said Steinhauer, who had turned off his podcast and was trying to make eye contact, “And it’s scary to think that I was right.” He stuck an earbud back in his ear before he stopped himself and began to wrap them up again. “Being social is hard enough without thinking about what other people have to say.”

According to Steinhauer, headphones are one of the best ways to tell others “Don’t you dare talk to me” without expending the extra effort of making a death glare or desperately avoiding eye contact. He opts for earbuds, however, because any loss in audio quality is made up for by being more flexible than headphones for surreptitiously half-listening in on other people’s conversations.