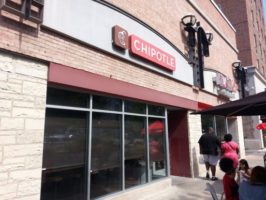 Evanston residents were shocked when local saint Evan Klight, WCAS ’18, tipped a Chipotle worker with his spare change after ignoring the three-homeless people on his path there.

“It was incredible,” stated bystander Jerry Lawrence, “there he goes, strutting down the street, passing the homeless people he sees every day, hungry for Chicken Sriracha. But once he got into that Chipotle, he showed us just how holy he was when he took out some loose change in his pocket and put it into the tip jar. Truly, he is a saint, and a better man than us all.”

The Chipotle workers were even more astounded by Klight’s actions.

“I always thought we were at the bottom of society,” responded Chipotle worker and tip-receiver Devin Chan, “people always look at us like we only exist to give them food, and we were treated with the respect you give to a homeless dude out in the cold asking for change. But when Evan got here, and put that 47 cents into the jar, I suddenly regained hope in humanity and my own position in life.”

Other Chipotle workers expressed similar beliefs about Klight’s generosity and holiness, and reportedly pray for the day when he returns and puts a single dollar bill into the tip jar.

“Well, I had some loose change that I needed to get rid of,” Klight explained, “and I thought it would be better to do it there than outside, where the homeless people would stare at me with their beady little eyes and depressed faces and ask for more.”

After hearing of Klight’s actions, City Council proposed building an Evan Klight Park in the middle of downtown Evanston, centerpieced by a life-size statue of the heroic sophomore. However, the plan was scrapped when the council realized that homeless people would probably congregate around it looking for shelter.