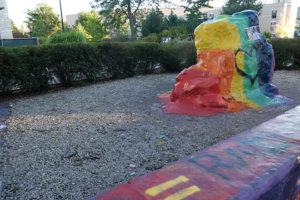 Following a lively town hall, embittered Evanston residents have announced their decision to throw their own music festival in the middle of campus, with the aim of inconveniencing as many students as possible. This day of music was suggested by Lisa Cummings, 76, who has allegedly put up with the “ruckus” caused by Dillo Day for the past 20 years. Cummings has been a vocal anti-student leader within the Evanston community since retiring to the college town.

“This new festival will really reinforce the message that Northwestern students have no place outside of Northwestern.” Cummings said. “I’ve filed noise complaints, ratted out block parties, successfully vetoed affordable student housing, and generally fostered an inhospitable atmosphere towards anyone under 35.

“But this… this is my magnum opus.”

The planned music festival will take place during finals week and have one main stage on risers centered above the rock. Large speakers will be planted in each dorm and library around campus to ruin as many students’ days as possible.

“The city of Evanston really helped us with all the planning,” Cummings said. “We’ve even got a sponsor lined up. Symphony of Evanston Presents: Rage at the Rock.”

The first act is scheduled to open at precisely 6:00 am on the Monday of finals week with subsequent acts performing during the Chem 103, Econ 310, and Physics 135 midterms.

Any Evanston resident receiving social security is invited to attend free of charge while Northwestern students will be required to pay a “goodwill fee” of $50 regardless of whether they plan to attend. Any student caught near the rock will be escorted off festival property to a dorm of the police officer’s choosing, at their own expense.

Student reaction to the festival has been generally resigned. “We should have seen this coming,” said Andrea Bergmann, WCAS ’18, a member of Mayfest’s executive board. “Asking for a whole day of music and celebration? No specially-designed speakers or police presence can correct the error of our hubris. I see this now. The inconvenience that generations of students has inflicted upon this gentle, lenient community is unforgivable. Thanks to the awareness raised [by Cummings], Mayfest is going to drastically change Dillo as well. Next year, Mayfest will provide free headphones to students so that they may listen to the artists being Skyped in, in the comfort of their own dorm rooms.”

Mayfest later formally apologized to the city of Evanston, saying that they were unaware elderly residents expected to settle in a college town without being subjected to actual college students.

At press time, Cummings has been seen pushing for increased police presence for the music festival. City officials were last seen considering her proposal to allow Evanston PD interceptors to ram student bikers off the sidewalks of Sheridan so that attendees will feel safer.