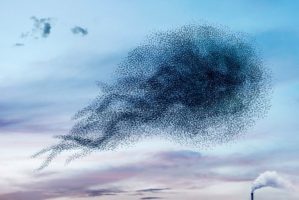 After months of digging, construction crews reached deep, deep below the pipes of Northwestern. The sealed earth, undisturbed for centuries, was penetrated by a crew of workers late last night, leading to the unearthing of the demon’s heart. A crowd quickly gathered as the crew raised an obsidian box out from underneath the pipes. However, intrigued murmurs quickly turned into panicked screams as onlookers fled from the swarm of gnats unleashed by construction workers dragging up the heart of ancient pagan demon Ka’Zae’El.

As bystanders fled from the scene, a grizzled old man was seen in the middle of the gnat swarm, wearing nothing but Northwestern paraphernalia from the late 1800s, cackling and yelling, “Fools! He was sealed for your protection!” The swarm quickly grew, reaching the lakefill and tech in a matter of hours.

As students took shelter in dorms and classrooms, whole construction crews were dragged past the fences that obscure the dig site, vanishing into the seemingly endless horde of gnats pouring from the obsidian box.

“The signs were obvious but the administration was foolhardy and forgetful,” claimed Dorothy Hayes, a librarian that has worked at Northwestern since 1940. “Any historian knows that the ground beneath campus is hallowed by pagan witchcraft. The ancient ones knew to build out onto the lake rather than down into the abyss.”

Along the edges of campus, the gnats formed a dome, blocking out the sun and sealing in all who remained on Northwestern property.

“Now is the time of upheaval,” reported an unknown girl in the sorority quad who would only refer to herself as Asmodeus, Rush Chair. She added, “The inversion arrives: Hell will be Earth and Earth, Hell. The seal is broken and the heart beats. With each pulse, the life-blood of our gnat lord spreads through campus and soon he will be amongst us.”

In addition to the campus-wide abduction of students and construction crews by the ever-thickening swarms of gnats, students have reported studying for finals to be impossible as their notes are now inexplicably written in ancient Aramaic scribblings. “Not only did construction wake me up in the morning, but now, thanks to them, I can’t even study for my finals without exorcising minor demons from my orgo notes,” complained Sophie Berkovich, WCAS ’19, while sprinkling her notebook with holy water.

At time of press, the administration sent out an email to the student body in reassurance that they are doing their utmost to deal with the forgotten evil and that student safety is the university’s number one concern. Students are advised to ignore impossibly large hands reaching out of construction sites and heaving masses of charred flesh rising from the depths as they continue about their day. Additional campus loop shuttles have been provided as an alternative to being dragged into the inconceivable darkness via gnat swarm.