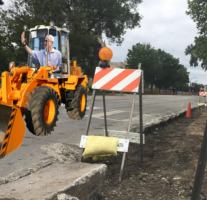 With move-in day and the start of school looming, students new and old were dismayed to hear that the improvements to Sheridan Road would not be completed by the start of the school year. Construction crews on South Campus were allegedly told to relax for a week or two while Northwestern president Morton “Morty” Shapiro takes a spin on their “wicked cool dozers.”

The administration reports that Morty developed a fascination with heavy construction equipment while watching “Extreme Engineering” on the Discovery Channel during his allotted hour of TV time. “The big guy just loved it, I mean Morty’s always been hands on–just look at his golf cart fiasco–but this time I knew we wouldn’t be able to distract him with administrative paperwork,” said Mark Hildebrand, a summer assistant to the president, “so we told the construction crew to leave the keys in the ‘dozer’ and just let Morty burn himself out.”

The City of Evanston officials in charge of the project went down to confront the joy-riding Morty but were apparently unable to get his attention while he scooped up gravel and made loud “beep-beep,” “vroooooom” and “eeeeerrrrrrrrrgh” sounds. According to a source on deep background, city officials were advised to come back in a couple days after university officials had distracted Morty with the newest episode of “American Pickers.”

“I don’t get why they’re so pissy,” said Hildebrand in reference to the city officials’ complaints, “Morty doesn’t have a long attention span. Soon he’ll be caught up in his next misadventure and construction can continue as planned. No biggie.”

Update: Construction crews are reporting an unexpected delay will likely extend the project into Spring 2019, as at time of press, a group crossing Sheridan Road reportedly witnessed Morty ramming the bulldozer full speed into an exposed sewer line, rupturing the line and scurrying away while the wastewater rose to ground-level.