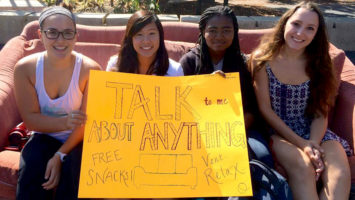 In a bid to increase membership in the upcoming year, the Happiness Club has made it clear that students do not need to have any experience in feeling happiness in order to be members.

“We’re aware that it’s a rather niche interest among Northwestern students, but we’re hoping that we can bring in more people this year,” says club founder and president Michelle Childers. “In fact, I would say that most of the members of the club had almost no prior experience before joining, and yet everyone has really taken to it.” Students have responded well, and many signed up even if only to give enjoyment a chance.

Sophomore Brandon Wong says that he’s looking forward to another year and encourages students to give it a shot, even if joy “isn’t really their thing.” Says Brandon, “Between social anxiety and academic pressure, I know that I was only happy in high school maybe once or twice, so I was pretty worried that I would be out of my depth, and I definitely struggled to keep up at first, but they really ease you into it.”

Childers is glad that people are interested, but she’s not surprised: “One of my friends at our sister organization at UChicago tried the same campaign last year and membership tripled. And she’s pretty sure that the fourth guy’s gonna cave eventually.”