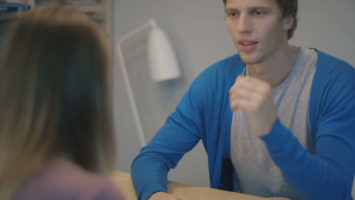 Upon walking into his Econ lecture this past week, Bienen freshman Abe Jozek reflexively exclaimed “Trumpet” as he was greeted by the student sitting next to him.

Jozek attributed the outburst to two weeks of being asked by other Bienen students what instrument he played. “I just got so sick of all the pleasantries involved with meeting all these annoying people,” he remarked, “I figured if I just shouted my instrument out the minute I messed up someone’s new-fangled handshake I could cut to the chase and move on with my life.”

The cluster of directionless Weinberg students within earshot of the incident were very confused by the incident. Many reportedly had confused looks on their faces, unsure as to whether or not the term Jozek uttered would need to be on the upcoming mid-term.

“It sounded like the kind of word that would be mentioned alongside ‘marginal utility’ and ‘comparative advantage,’” said Weinberg freshman Nat Kegel, “Apparently it’s got something to do with music though. I’ve never heard of him, but I’ll check him out on Spotify.”