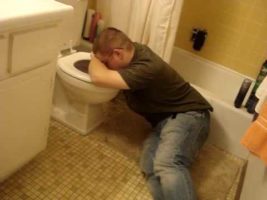 Saturday night, while perched over the toilet, Weinberg freshman Greg Tarver told the Flipside the apparent upsides of having a low tolerance for alcohol. “Being a lightweight saves so much money!” claimed Tarver, with strings of snot and bile still dripping from his nose. “And I’m probably not gaining too much weight, because I don’t have to drink as much to get to where I need to be.”

Sources say Tarver consumed only three standard drinks over the two and a half hours he spent at a party on Saturday, though Tarver claims that he poured “like, a couple shots worth” of liquor into each of his disgusting vodka Sprites. “It was uncomfortable,” said Medill senior Jessica Liu. “There were probably twenty people there total and nobody else was nearly as drunk he was.”

Tarver’s roommate Nick Porter is not convinced about the alleged benefits of being a lightweight. Porter told the Flipside “Yeah, I guess Greg was trying to tell me that having a low tolerance is cool. Honestly, I could barely hear what he was trying to say over the sobbing and dry heaving.”