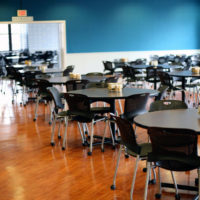 Northwestern students contacted by the Flipside indicate that dining hall food ranks a distant third among the things they’ve eaten today, behind tears and semen. When students aren’t eating dinner at any of the five dining halls between the geriatric hours of 5:00-7:00 pm, they are reportedly finding creative alternate sources of nutrition.

Among the most frequent complaints of the dining halls were the poorly-sized dishes. Freshman Kenny Schmidt describes the plates as “frugal, limiting, and offensive. It’s obvious the administration is trying to subtly hide their intentions of forcing us to diet. I’m not about it.” Northwestern dining services confirmed that “[their] goal is to drastically cut down on freshman fifteen victims, with the hopes of influencing students to make healthier choices.”

Schmidt, however, claims that he and his fellow classmates found a loophole. Another student comments, “We have two hands. Two hands means two plates, bitch.” Similar to a one-trip grocery bag haul, students will pile on upwards of three platefuls just to “stick it to Morty.”

With a generation bred on instant gratification and ADHD, waiting in lines is worse than “a hundred bee stings to the nipples,” according to senior Linda Lecroix. Sargent and Allison halls are infamous for their Disneyland-esque ques. Lecroix says that “those who cut the line because ‘they just want to grab one thing real quick’ get the same glares that those with fast passes get. There is nothing worse than letting someone cut you because you don’t want to be that asshole.” Make no mistake, the queued NU students have the same reaction as the Mickey Mouse-adoring four year old kids- tears. When asked about the current ranking of tears, semen, and dining hall food, one source stated, “At least the first two come quickly.”