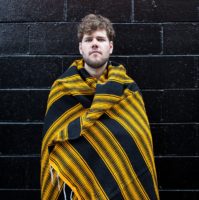 In a move many described as far too scary, Weinberg senior Robert Bowen showed up to a Halloween party dressed up as the abstract concept of intimacy. Sources say Bowen was able to bring the terrifying concept to life by wearing a blanket to represent cuddling after sex and asking everyone at the party about the specific nature of their family’s dysfunction.

Though the theme of the party was to wear the scariest costume, Bowen’s outfit was not received well. “I know people wear scary costumes on Halloween, but Robert crossed the line,” said party host Edward Nguyen. “He kept trying to hold my hand in public. It was freaking everyone out and eventually I had to ask him to leave.”

When asked to defend the reasoning behind his costume, Bowen told the Flipside that he was trying to “define his relationship” with classmate Martha Richman. Said Bowen, “We’ve been hooking up for a while, but I’d like to take it to the next level. I wasn’t sure if she’d be into it, so I thought maybe I should wear this costume and hope she takes the hint.”