Circle of Raccoons Around Rock Definitely Up to Something 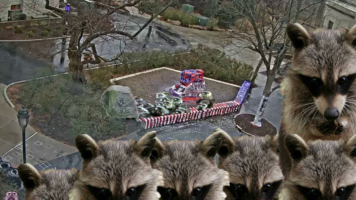 An ever-growing circle of raccoons has been sighted patrolling the Rock, unnerving bystanders and confusing university staff. Initial reports describe the scene as eerie with the small mammals forming a cult-like, constantly moving symmetric figure around the Rock and area near University Hall. An unconfirmed student group that was guarding the Rock at the time has stated that they don’t feel comfortable breaking the circle and have decided to wait out whatever these raccoons are planning.

“Something about how they’re rubbing their little hands together synchronously, after a new raccoon joins the circle every sixth minute, just really freaks me out,” said Steven Kasmer, WCAS ’18. “Is this what guarding the Rock is normally like? I just wanted to do it once before I graduate.”

After seven hours of continuous motion around the Rock, those watching the spectacle reported the large number of raccoons definitely getting up to something. “I suddenly wanted nothing more than to use my hands to pry open the nearest garbage can and feast on the delicious treasures within,” divulged Marco Salzetta, MEAS ’21, before scurrying away to Norris. “It’s hypnotic, the circle I mean, look at how they look like little bandits. They could steal the world right out from under us.”

“If you don’t get it then I can’t explain it to you,” muttered Kasmer to Flipside reporters while staring vacantly at the Rock in the center of the raccoons’ circle. “This is the most important moment of my Northwestern career. This campus is a stage and these raccoons are harbingers of change, the hour will soon be brought like a curtain falling. You must ask yourself, as it falls, which side will you choose?”

At time of press, 36 raccoons have been spotted taking part in circling the Rock. Staff on site have allegedly lost track of Steven Kasmer but report the last raccoon pausing to give them a forlorn look before completing the circle.