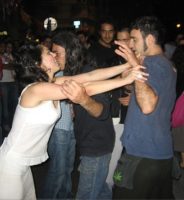 Onlookers reported an awkward scene after Sally May, WCAS ‘21, asked her current two-time hookup what restaurant his parents were taking them to during their PA group lunch at Allison dining hall.

Other members of the PA group also reported feeling very uncomfortable as Randy Barrett, WCAS ‘21, got up to leave – excusing himself to the bathroom to never return. May said that he probably got an upset stomach due to “nervousness, you know, the butterflies of romance.”

Although he had never mentioned a relationship, May continued, “he’d give me signs. Like once he sent me two messages in a row. Like you only do that if you want to be in a relationship… and get married. And have three kids. And a cocker spaniel. Also, another time, our group had a meeting on the stairs of New Kellogg and I was standing on a stair above his stair and I was like, ‘wow it’s like I’m Juliet on the balcony and he’s like Romeo.’ I told him that which made him sigh and climb up to my stair with his arms crossed. Such a romantic”

Other PA members said Barrett made it abundantly clear he did not want a relationship through his body language of never looking directly at her and then eventually yelling the words “I DON’T WANT A RELATIONSHIP!” during conversations at PA group meetings. He also directly told May before hooking up that he did not want to be in a relationship. Yet, May had another take on the situation, “yeah Randy did say that but I know it’s just like a romantic comedy where at the beginning they were just friends with benefits and then become more.”