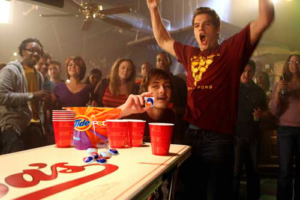 Tide Pods have been sweeping across the nation, appearing on pizzas, late night TV shows and inside stomachs. Now, the famous detergent packs are appearing in the last place you’d expect to see any cleaning supplies: Northwestern fraternities.

“Everybody and their non-frat brother is out there playing beer pong,” remarked Alpha Beta Ceta veteran Jeremy McMuggin, “and we’re always innovating here at ABC. So, me and my guy Tony “Legs” Machiavelli were like ‘what if instead of eating the Tide Pods, we threw them into cups and drank it?’”

The rules are simple: each of the two players attempts to throw a detergent pod into the cup of water in front of their opponent. Beer is also valid if there is no water available. Every time a player sinks a cup, their opponent must drink whatever has dissolved into their cup. First one to pass out, vomit or experience cardiac arrest is the loser.

In addition to McMuggin and Machiovelli’s traditional tide pong, variations have appeared around campus, most notably Bobb Hall’s famous “speed rounds.” A speed round begins with a 911 call for an ambulance, usually by a bystander or referee. The two players then attempt to sink as many pods as possible before the medical team knocks on the door, with the loser consuming the detergent before answering the door.

“I think I’ve played about 7 or 8 rounds now, but it’s kind of a blur,” claimed freshman Daniel Jones. “Although, after my most recent trip to the emergency room they gave me some prescription pills, which is a nice bonus.”

Rumors have been circulating of multiple Tide-based initiations this winter, with reported “detergent shots” and “bleach baths” required for pledges.

The trend has not yet caught on outside the fraternity quad, but fraternities seem eager for GDI support. “We’re still looking for a tiebreaker rule,” says McMuggin, “if you have any ideas drop by the house: best suggestion wins an ABC 2013 rush shirt.”