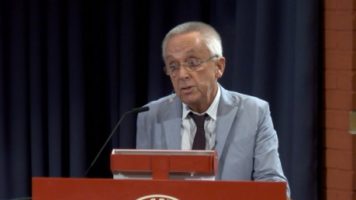 Flags were raised and parade floats filled the city streets in celebration last Thursday after economics professor Ronnie Leggins closed an ad at the bottom of a Youtube video he was showing his class.

“Today is the beginning of a new era—an era of, like, hope and stuff,” he declared. “We like literally have a long and tough fight ahead, but I totally believe that one day, teachers and professors across the country will learn how to close Youtube ads when they’re playing videos for a class!”

According to sources, it is still unclear whether Leggins actually meant to close the ad, or if he just accidentally clicked on the “x” when he was trying to enter full-screen mode. Nonetheless, his students were amazed.

“I never thought this day would come,” cried Shirley Pinkman between tears of joy. “That said, I still don’t understand how Professor Leggins managed to win the Nobel Prize twice and yet has only just figured out how to close a Youtube ad.”

Despite this tremendous sign of progress, expert predictions show that it will still be another 200 years before professors learn how to move the cursor off screen so that the streaming bar disappears.