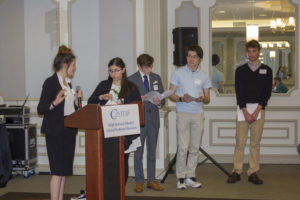 “I saw the two of them sneak into Powell’s hotel room last night, and this morning he had a real smug smile on his face at the hearing on nuclear non-proliferation,” said Jack Weber, a delegate from the Democratic Republic of the Congo, noting that this new alliance could have a wide-ranging impact on sanctions against Syria as well as ongoing multilateral trade negotiations.

When asked to comment on the diplomatic tryst, Powell, who reportedly never got any action from the girls he hung out with back at Jefferson High, declined to elaborate. “I have been entrusted by the people of my country to conduct these affairs confidentially, and so I cannot reveal my highly sensitive political maneuvers,” he said, also failing to confirm allegations that “Snyder’s perky tits” convinced him to block a climate change resolution at Mexico’s request.

Snyder herself indicated that these “unfounded rumors” should not interfere with the Model United Nations’ pressing tasks. “Neither the size of Powell’s dick in particular nor the horniness of the Eastern Bloc ambassadors more generally should take away from our efforts to provide security and prosperity to the world,” the high school senior said.

At press time, further reports emerged saying that the Russia-Mexico alliance was already becoming imperiled as Malaysian delegate Jessica Stroman passed Powell a note during session with her phone number and hotel room on it.