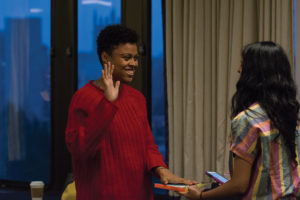 Even after a successful campaign, ASG President-Elect Sky Patterson cannot escape the controversy that plagued her bid to lead Northwestern’s student government, as documents obtained by the Flipside reveal that she accepted $13.35 in bribes while serving as the Vice President for Academics.

A formal report filed by an anonymous whistleblower to the ASG Election Commission alleges that Jason Guo, Junior Undersecretary to the Vice Admiral of Academics, delivered an Edzo’s double-griddle burger and strawberry milkshake to Patterson and never received reimbursement.

“Guo was trying to secure votes for his program ‘Cats Jack Off’ at the time, which purchases and distributes premium pornography subscriptions to Northwestern students. He clearly thought that by providing this gift to Patterson, he could secure an influential ally,” the report states.

Patterson did not initially seem to remember the incident. “Jason? Jason who?” Patterson said.

After being shown a photo of Guo, she said “Oh, that Jason. Yeah, I remember when he brought me Edzo’s unprompted. That was a bribe? I thought he was trying to hit on me. He never mentioned a vote or any kind of deal…”

“I guess I should have Venmo’d him back, but the whole thing was so weird, I think I just tried to bury the memory.”

However, the whistleblower believes that Patterson’s participation or non-participation in the bribe is irrelevant.

“Despite the fact that Patterson eventually voted against ‘Cats Jack Off’ on the Senate floor, this transgression represents an egregious violation of the campus community’s trust and a moral blind spot on par with Holocaust denial,” the report says. “Northwestern students deserve leadership they can believe in, leadership that won’t trample ASG policies just for a free burger.”

However, the Election Commission did not share the whistleblower’s evaluation of the seriousness of the situation. In a meeting that lasted just seven minutes, committee members quickly dismissed the report as “obviously crazy” and “not worth even a twenty-minute investigation.”

“I mean, it cost what, like thirteen bucks?” said Election Commissioner, Rachael Henson. “That’s not a bribe that moves the needle. The real crime is how much this guy paid for a burger and shake. Has he never heard of Steak ‘n Shake?”

Informed that the Flipside would publish this story, as well as the entirety of the report, Patterson was seemingly indifferent.

“I mean, if you want to, go ahead. This campus is famously chill about minor student government drama. Right?”