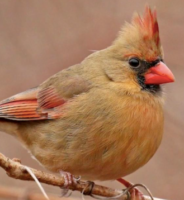 Last Monday, a strange-looking bird with a Mohawk was spotted in the sorority quad, signifying that spring is probably here now. The bird, which wasn’t on campus in the winter, is now back on campus, raising the possibility that winter is finally over.

“When I first saw the bird, I was like ‘Oh, okay, I guess spring’s here,’” said Jason Kang, WCAS ’21. “But then I remembered it’s supposed to get really cold next week, so maybe it’s not spring yet… to be honest, I don’t really care.”

When asked for her analysis, environmental science professor Janice Pendel explained, “It’s a bird with a Mohawk, so I assume that’s a sign of springtime. On the other hand, it could be a complete coincidence. I have no idea. Now please leave my office because I have actually important work to do.”

Dozens of people passed by the bird for the 20-minute period it was perched on the tree branch outside the Alpha Omega sorority. Although nobody took pictures of the bird, two passersby stopped for a couple seconds and stared at it apathetically, presumably wondering whether spring had come, before shrugging their shoulders and moving on.

Yesterday, after several days of research and deliberation, a team of ornithologists and weather experts published their research findings in Scientific American, writing, “After seeing the weird Mohawk bird, we’re 50 percent sure it’s spring—but don’t take our word for it.”