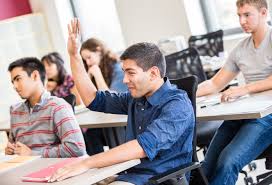 With the angle of his wrist increasingly approaching inquisitive status, latest reports indicate that area student Neal Kepler’s arm is teetering on the precipice of becoming a raised hand as he sits in his Econ 311 lecture.

“If Neal keeps resting his arm on the seat next to him without clearly propping up his head with his fist or something, then it’s only a matter of time before the professor asks him if he has a question,” says Rachel Horford, who has been watching this precarious situation unfold from two rows behind Kepler.

Other witnesses report that Kepler has only further implied his limb’s intention by sticking his index and middle fingers into the air while his other fingers remain curled up.

“I mean, the guy’s basically asking for it at this point. The sad part is that he’s been on his phone for the past 20 minutes and is going to be completely startled when the professor stops talking and says his name,” says TA Brian Simmons from the back corner of the room.

Update: Kepler has clarified that he is just stretching.