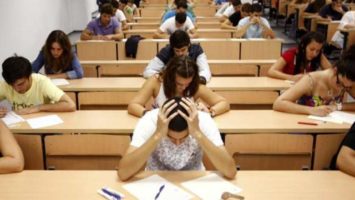 In an effort to make STEM fields more relatable, faculty within the Chemistry department set-up a live stream of the Chem-132 final for 2 minutes before Twitch staff were inundated with horrified requests to end the stream. The live feed of students struggling to finish the final quarter of the general chemistry sequence was immediately flagged as graphic/violent content and Northwestern computers have been banned from using all Twitch streaming services.

Despite the near-immediate termination and removal of the live stream, mirror videos have already appeared on websites such as ru.crimegore.net and www.deathcams.com. Twitch staffer Derek Hazel lamented the breach in streaming standards, saying, “We try hard to monitor all of our content and today was clearly an unfortunate lapse. We sincerely apologize for showing the brutal, near sadistic, torture of those students. Especially the look on the student in the third row’s face after the TA told him that he couldn’t provide any help.”

“I really enjoyed watching it,” stated Professor Karl Gustaffson, one of the faculty overseeing the final, “Seeing their reactions as they realized half the questions came exclusively from the supplementary readings really did it for me.” After being reminded that the initial point of the stream was to promote STEM fields to new students, Gustaffson shifted awkwardly in his seat, sweating slightly. “If only we could have gotten a feed of those poor students. Really see the impact.”

Northwestern officials plan to investigate the entire Chemistry department and ensure all undergraduates who declared chemistry as their major did so consensually. “Sure, they didn’t tell us there was a live stream of the final” said Erica Klein, a newly declared chemistry major, “but this was nothing compared to the DVD release of the annual departmental burning of the senior theses of all graduating students. Turns out it’s a big hit in Indonesia.”

The impact on the viewers is still unclear but the History department has seen an unexpected 25% increase in enrollment. “What can I say?” said Carlsisle Drambouie, professor of American History, “Those who remain ignorant of history are doomed to repeat it.”

At time of press, the department of Physics and Astronomy has announced it has decided not to release a virtual-reality test-taking simulator, citing concerns over the 13 hospitalized beta testers.