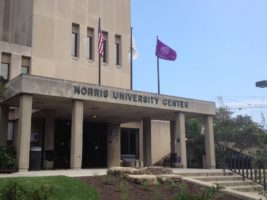 A shocking new report reveals that Northwestern’s heavily marketed “MeetMeAtNorris” hashtag is most often used for the purpose of setting up illicit drug transactions. A team of special undercover agents, masquerading as loud theater majors in Norbucks, confirmed the information after months of secretly spying on students.

Almost immediately, Head of Marketing Chloe Prinn released a statement condemning the popular use of the hash tag for underground drug purchases.

“We are very disappointed to find out how our hash tag is being used,” said Prinn. “At the time I coined the term, I thought it was clear that #MeetMeAtNorris should only be used to arrange club meetings, study sessions, and wholesome stuff like that.”

Despite causing an outrage among campus officials, the news did not come as a shock to most students.

“Hold up—you’re telling me that #MeetMeAtNorris isn’t for setting up drug deals?” exclaimed Patty Jenkins, WCAS ’21. “I don’t get why else you’d meet anyone in there. The architecture is hideous and the Frontera Fresco only opens every time Daniel Day-Lewis stars in a new movie. That’s like every six years!”

Additionally, the students interviewed overwhelmingly agreed that that using the hash tag “MeetMeAtNorris” saves a lot more time than spelling out the location in a full sentence, allowing them to maximize their illegal activity during ten minute passing periods.

Like Jenkins, university building planners have also been under the impression that #MeetMeAtNorris is for drug transactions.

“We also assumed that the purpose of Norris was to provide students with a more convenient place to buy and sell narcotics,” said construction manager Ron Platt. “In fact, the reason our display model for the renovated Norris is completely white is so that if someone drops cocaine, it will blend in perfectly with the floor.”

At press time, the Marketing Office at Northwestern was busy testing out new hash tags, including #MeetMeAtNorrisButNoDrugs, and #SellWeedAtKresgeInstead.