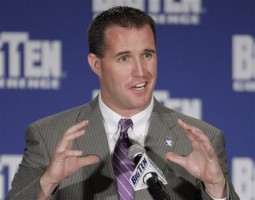 Premed student Charlie Nigam, WCAS ’20, was delighted and confused by a surprise phone call from Pat Fitzgerald, in which the head football coach told him the secret to passing his upcoming chemistry midterm was to wrap up and remember the fundamentals.

“You would think that he’d be a little busy preparing for the Big Ten Championship game, but I guess it was cool he took the time to talk to me,” Nigam said. “I still don’t know how he got my number or even knew who I was.”

According to Fitzgerald, he told Nigam what he tells every linebacker struggling to make plays in the open field.

“Stick to your fundamentals, stay focused, and get your man on the ground.” Fitzgerald said. “That’s the bottom line. Don’t worry about being flashy or impressing anyone. Just wrap up and live to play another down.”

Nigam claims to have been inspired by Fitzgerald’s advice, even if it seemed more about bringing down opposing running backs than memorizing the properties of dozens of compounds.

“I mean, it was inspiring, you know?” Nigam said. “Not sure how relevant it is to my test, but I feel ready to run out there and make the team proud.”

UPDATE: 73-year-old chemistry professor George Huff is in critical condition after Nigam allegedly stormed the exam room and threw him into the wall, bellowing unintelligibly.