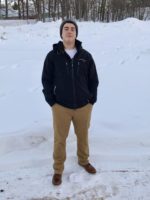 Winter has finally kicked in with the days growing shorter and the weather getting colder, and students from the Midwest are getting excited. Any day now the first major snowfall will occur, allowing them to act completely unbothered.

When campus sees multiple inches of snow for the first time this season, students should expect to hear phrases spoken around campus such as “This is nothing,” and, “We’ve had way worse around here.”

Midwestern students relish the joy they attain from being used to snow, as there is little else to brag about when you hail from some lame town in the middle of the country. People from warmer states are especially susceptible to being admonished for not being used to snow. Floridian and Californian students are warned to be wary of who they complain around, lest a Midwestern student overhears and feels the need to correct their ignorance.

The Flipside interviewed Alex Henderson, an economics major from Indiana, who said, “I already have my outfit picked out: a light jacket and a pair of shorts. Everyone is going to notice how little the precipitation affects me.” He was later seen feverishly checking his weather app while walking back to his dorm, his tank top flapping aggressively in the brisk wind.