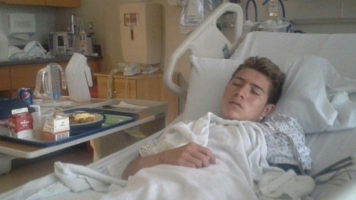 A Northwestern student has been admitted to Evanston hospital after drinking a mixture of blue Powerade and Sprite in Sargent dining hall.

Weinberg student Kyle Denton was eating lunch with his friends when they pressured him into drinking a cup of Blue Lightning, which is the street name for the dangerous concoction. Witness reports claim that he took a sip of the mixture (two-thirds Powerade and one-third Sprite) and almost immediately collapsed on the floor. Dining hall workers called an ambulance as Kyle began to seize. He was rushed to the hospital minutes later.

Kyle’s friends were taken in for questioning by police to determine if they had malicious intent. Kyle is currently recovering in the hospital. He told reporters, “The last thing I remember is my lips and esophagus burning as the Lightning flowed down my throat. I’ve never felt so much pain paired with such pleasure.”

Police officer Brian Wilks told reporters, “Kyle is lucky to be alive. We respond to too many calls like this one, and very few have endings as happy as Kyle’s.” The Evanston Police Department is planning to begin an educational campaign to help students make the right decision and say no to reckless dining hall mixtures such as Blue Lightning. They want the public to know that the intense rush of pleasure Blue Lightning gives is not worth the risk of injury or death.